A Frankenstein created by a Doctor working for the British Empire. Made from the final victim of Jack the Ripper, the intent was to interrogate her for information once she was complete. She was a failure of a Frankenstein however, killing her creator and escaping.

Before she died, Mary was married to Lord Weiss and had Violet with him. For reasons that haven't been explained, she took Violet to London, where she became a prostitute and gained a debt. After she died, her daughter inherited the debt.

Mary was a cold hearted person when she was alive. She took Violet form her father and home as a form of revenge for divorcing her.

Later she abandoned Violet, because she got tired of raising her.

Her memories and personality have been warped, Mary is a broken Frankenstein. After tearing off her arms to escape the British Government, and killing her creator, Mary began to wander London, singing and looking for her Daughter, Violet.

Unlike her living counterpart, Frankenstein Mary seems to care more about Violet and she is more affectionate towards her. 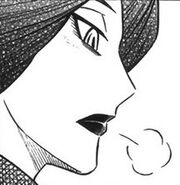 Mary when was alive

Mary singing to little Violet
Add a photo to this gallery

Retrieved from "https://embalming.fandom.com/wiki/Mary_Jane_Kelly?oldid=5543"
Community content is available under CC-BY-SA unless otherwise noted.